Posted on February 16, 2012 by richardjostler

I was given Simon Warren’s book, 100 Greatest Cycling Climbs, for Christmas. If you haven’t got it, it’s a handy little reference guide to some of Britain’s best climbs. As you might expect, the book groups climbs into their geographical regions. Naturally my first instinct was to find the East Anglia section. There was no East Anglia section.

This glaring absence got me thinking about the climbs you can find in Cambridgeshire. I plan a lot of our club run routes and usually try to navigate to the lumpier parts of the county, so I like to think I have some good local knowledge here.

More recently I was gently mocked for suggesting there are hills on my local patch. Fair enough, we are mostly Fenland, but I still think we have some good climbs and hilly (I use the term advisedly) routes. So, I have catalogued what I think are the 10(ish) best climbs and hill routes Cambridgeshire has to offer. Just don’t expect too many contour lines.

Before starting I should first explain; I’m a Fen boy. That means for many years I thought the words hill and flyover were synonymous. What you may think of as a small hill, to my eyes is a colossal mountain. 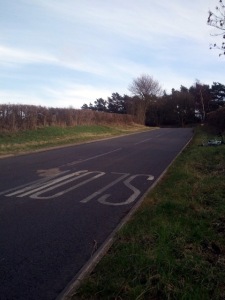 This hill is used for the St Neots CC Hill Climb (although Staughton Moor has been used for the past few years). Everton lies atop the North Eastern tip of the Greensand Ridge stretching through Bedfordshire to Buckinghamshire. The approach is pan flat until you reach the slope up to the ridge; start the climb here. The road goes straight up before hooking left at a 14% gradient then levelling off as you enter the village. This hill deserves to be attacked and with a village sign at the top is best raced against a couple of your, cough, larger cycling buddies.

2. Belton Hill to Barham
2.1km, 55m
http://gb.mapometer.com/cycling/route_1683070.html
This route has two climbs and is used for the St Ives CC Hill climb. Yes, it is a trek from St Ives. The climb starts at the foot of Belton Hill on the north side of the of the A14. Belton Hill is a short sharp 1:10 hurdle over the ridge separating the villages of Spaldwick and Barham and is guaranteed to get the heart pumping. Once over the ridge there is a long graceful descent before the stepped climb up to Barham. The road is exceptionally quiet and finishes with a village sign, so cries out to be raced.

Start just off the Kimbolton Road (B645) . There is no run-up for the 20m climb to Agden Spinney, so make sure you’re in a low gear. It may not be big, but don’t waste the energy to look back at the 11% steep hill sign as you crest the rise, instead, savour the picturesque descent alongside a rolling patchwork of woods and fields. Carry on for 1.75km turning left at the T-Junction towards Perry Hill. The road slides down until you reach the tree line marking the foot of Perry Hill. The 40m climb is gentle until the final few metres where the patched road surface suddenly pitches up.

If you’re so inclined, you are now perfectly staged to pay homage to the Classics and head off-road on the tracks around Grafham Water.

4. B660, Glatton to Kimbolton
23km, 236m
http://gb.mapometer.com/cycling/route_1683061.html
This is one my favourite stretches of road. Ride it and I hope you’ll see why. The route starts at Glatton, sitting on the western edge of the Fens. To really appreciate it you could start further east along the B660 at Ramsey St Mary’s, deep in the Cambridgeshire Fens. From there the road heads past one of the county’s lowest points at Holme Fen and site of the now drained Whittlesey Mere. It’s no joke when I say the first climb you’ll encounter is the flyover crossing the A1 into Glatton. Which is why, for this, the route starts in Glatton.

From Glatton the road steadily ascends 40m into exposed countryside. Catch the wind wrong and this section can be brutal and the open summit will offer no respite. The road dips and climbs a couple more times before entering Great Gidding. This first section forms part of a road race circuit used by local clubs. Further along the road was used for the 2011 British Time Trial Championships, so you will be riding on tarmac that has seen some quality riders.

The road descends through Great Gidding twisting left then right at the bottom, before climbing to the small village of Winwick. The road rolls onwards to Old Weston. Leaving the village the road kicks up to a left hand turn. Take this and follow the broad descending arc to the A14. There is a brief stretch of level before the final climb into Catworth. It’s a 40m climb which steepens and narrows at its mid point through high hedges, so take care for oncoming traffic. At just under 18km all but a few metres of the route’s 236 metres of climbing are over. The next 5km is flat and takes you to the final, fast kilometre plunge into the Kym Valley.

5. Croydon Hill
1.2km, 54m
http://gb.mapometer.com/cycling/route_1683086.html
Start just off the T-Junction with the B1042. There is a gentle 400m run-up before the road tilts up at 1:10 for nearly 40m. That’s all there is to it. Continue through the Hatleys to Gamlingay. 6km of quiet road through beautiful countryside, it is a pleasure to ride, and downhill all the way.

6. Chapel Hill, Eastern Approach
0.5km 35m
http://gb.mapometer.com/cycling/route_1683100.html
Chapel Hill is a proper up-and-over and the eastern approach is a straightforward steep climb. Start just off the T-junction into Haslingfield village and be sure to be in a low gear as you immediately hit the 1:10 slope to the summit.

The A603 to the north west crosses the same ridge line at Orwell. I think it is a slightly less interesting climb and on a busier road, but still worth a ride. 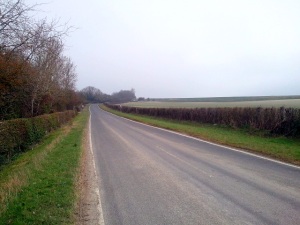 Chapel hill, looks can be deceiving

The western slope of Chapel Hill is the longer and more interesting ascent. The climb is approached through Barrington with its expansive village green, reputedly the longest in England. The road crosses a narrow gauge railway by the cement works where the climb begins. The hill starts off gently, then steepens sharply as the road kinks to the left just over halfway up. The gradient gradually flattens out to the summit.

Start the climb at the county boundary sign on the B1039 just east of Barley. The route climbs gently across open countryside to Chishill windmill then slopes down for 200m. The road starts to climb up a groove cutting across the arable fields before entering Great Chishill village. The gradient is steady and gentle for most of the kilometre through the village to the summit at The Hall.

If you want more hills continue into North Hertfordshire where you’ll get more of the same.

9. Wood Walton Village to Walton Hill
3.3km, 60m
http://gb.mapometer.com/cycling/route_1683066.html
This route consists of two climbs and if you’re tackling them, that almost certainly means you’ve spent some time rolling across miles of arrow straight roads where the maps are unblemished by contour lines. So, any trivial slope will be a shock to the legs. The first 30m climb takes you off the Fens. It’s steep enough, and once over the top the road bends round to the right down to Wood Walton village and back to the Fen edge. Pass under the railway and continue to the T-Junction. Turn left and head for the 1:10 climb up Walton Hill. The hill summits at another T-Junction. Left or right, it’s pretty flat either way.

Nearby Vinegar Hill at Alconbury Weston is a reasonable climb. However, it is a bit of a cheat too as the summit is artificially boosted by a flyover the A1(m).

10. South East Cambridgeshire Hills
I haven’t described a route here mostly because this is a corner of Cambridgeshire I don’t know well. It’s too far for our club runs and for longer rides I tend to head north or west where the climbs are closer. Nevertheless, between Linton and Newmarket, there are points over 100m, place names include “hill” and there looks to be a good network of quiet roads to explore. At some point over the coming months I’ll ride over there and report back the choicest climbs.

Nearby is Gog Magog. Unfortunately the main road up is a main A-Road with a dualled section. For this reason it isn’t a hill I would seek out on a route, but I think it deserves a mention. Just to the north is Beechwood Hill, route for the Cambridge CC Hill Climb and a better looking alternative. This isn’t a climb I’ve ridden but it looks like a respectable drag. Perhaps this autumn I’ll test myself on it…

Finally
Since starting this post I have learned Simon Warren will be publishing a follow-up book to 100 climbs in May, and it will include an East Anglia section. Needless to say, I’m looking forward to reading what he has to say for Cambridgeshire!

Over the coming weeks and months I will update this post with photos and new routes. And if there are hills you think I’ve missed let me know, because I want to ride them!