Posted on June 6, 2016 by richardjostler

The Tour of Cambridgeshire Gran Fondo was back in Peterborough for its second year, certainly bigger and hopefully better. This year’s format was slightly different with race, sport, challenge and leisure categories. Unlike last year, where the race pen riders all started together, this year the starts were staggered according to age group.

Hanging around in the morning there were plenty of fellow club riders to catch up with, but all to soon it was time to wish each other luck and depart for our allocated pens. I had gone for a race entry and though still only a (very late) thirtysomething, this is my fortieth year and so was placed in the 40-44 age group. With me from SNCC were Dan, Glyn, Simon and Theresa. I recognised a few other local riders, but not so many as last year. I guess most would have been in the junior age group pens rather than with the cohort of Veterans who could still boast some muscle tone and original colour in their hair.

Age group race pens and toilets, two of the 2016 improvements

At 11am the gates opened and we filed forward. Only another hour to wait with nothing to do but chat and, after hydrating all morning, make regular trips to through the obstacle course of bikes and riders to the portable urinals (arguably the biggest single improvement over last year).

Shortly before midday the next set of gates opened and we were kettled a little closer to the start line. The countdown for the reception age group (19-34) started at 10seconds to go. It got as far as nine before the flag went down and they were off. The 35-39 juniors followed a few minutes later and then it was our turn.

Getting ready for the start…

I was near the front on the right hand side. Hindsight showed this to be a minor mistake since I had to take the long way around the roundabout just beyond the start, but once on the wide open road I was quickly overtaking riders and moving up the bunch; I wanted to be well placed to avoid trouble for the tight left off the A605 onto Bullock road. I passed Dan and that was the last time I saw anyone else from the club for some 80 miles.

My legs weren’t bothered by the rolling west Cambridgeshire countryside, this was my home turf and roads I love to ride. I kept pace, I was being stretched, but I was enjoying every minute. I passed the spot where I had lost contact with the leaders the year before, but this time I stayed with them. All the while our group was becoming smaller and smaller.

We reached Alconbury Weston where my wife and youngest daughter had turned out to support with a freshly made banner. They were at the foot of Vinegar Hill, I waved then carried on up. I made it to the top and began to entertain thoughts of staying in the group. Then we hit Alconbury airfield.

The airfield was hard. It was exposed, windy and with a surface that varied from slippery smooth concrete, to gravel then rough, potholed and broken tarmac. On the mile long runway, once home to USAF Phantoms, the lead riders veered over to the gutter, optimistically seeking shelter from grass and weeds. We all followed, stretched into a line and I felt under pressure.

A shout went up followed by the clatter of carbon on tarmac as a rider near the front went down. I can only guess he was head down so didn’t see the traffic cone placed over a pothole. I think he took one other rider out, but the rest of us got by safely. When I passed him he was sitting up with the back of his jersey ripped clean off; I hope he was OK. The return to proper roads, lined with sheltering hedges, was a necessary tonic my legs were needing; the Fens were coming up next.

The last hill (by Fenman standards) before the Fens was at Wood Walton. I got over easily enough, but had my one hairy moment at the bottom. The road bends to the right here and a rider on my outside lost his line and cut across me.

At Bury, just outside of Ramsey, we caught another large group of riders from the junior groups. We had passed a lot already, but this one seemed to cause more confusion than most. We could all identify our groups from the colours of our numbers, we were green while the juniors were pink or white. I stuck assiduously to the green numbers and kept moving forwards, but still worried we might be split by a Fenland crosswind. I was only happy when I was back near the front, surrounded by green numbers again.

From the first climb on Bullock road we were overtaking groups from the other races. Ideally they should have been warned to keep out of the way and let the sharp end of the senior race bearing down on them pass. We had been briefed in the race book to do this, but I’m not sure it was happening on the road. Fortunately the majority of riders did move aside and let us pass, but whenever we encountered a larger group there was a fair bit of intermingling as riders tried to jump into our bunch. More often than not it didn’t matter; if they couldn’t hang in with their own race leaders they were unlikely to do so with us either and were soon spat out, but I still had to physically nudge a few out of my way. Some did hang on though and as the race progressed our group became peppered with a small number of juniors.

Back to the race and the Fens were windy, I would expect nothing less. We got to Pondersbridge and I saw my Mum watching on the turn on to Oilmills road. Sprinting out of the corner I got out of the sadly and cramped across both quads above the knee. I flushed the cramp out as best I could, but that set a theme for exiting many a corner for the rest of the race. Fortunately Fen roads tend to be straight and long, though that might have been part of the problem.

Soon after the cramp I started to lose the wheel ahead. We were stretching out and right then I was a weak link mid bunch, but it was my mid bunch positioning that saved me. Enough riders behind had the strength to chase back on and drag me with them. I was thankful for that and later on would repay the tow to at least a couple of them when the group threatened to fracture again.

After Benwick I was wondering how I was still in this leading bunch, but also confident that I could finish with them. The strong men at the front were clearly getting agitated and had other ideas. Concerted attacks began and soon a select breakaway of 8 riders had established. Our remainder organised and we chased them across the Fen roads with half of us working through and off. We pursued them up to Whittlesey, along Glassmoor Bank, back to Pondersbridge – this time I saw my Dad and brother too – but the wind was blowing the wind out of me and I retreated into the bunch for shelter.

At Norman Cross things got political. Instead of the usual Allez, Allez chalked on the tarmac were vote leave slogans. Even in a race you can’t escape the bloody referendum. Rather than read them I chatted bikes with another Bianchi owner.

At Haddon the road narrowed and I cramped again, slipped backwards a bit but pressed on and kept with the leaders. On the descent down to Bullock road and the final few kilometres I saw a St Neots Jersey. It was Ed. He spotted me and called out. I later learned he was in a three man break with a good half minute lead over the chasers, and with the distance left to run quite possibly good enough to stay away to the finish. If they had it would have been a second podium place for him after finishing third in Saturdays Chrono, but an indifferent flint took it away. It was a cruel end to his weekend, but he’s got talent and I know his win will come soon.

We turned onto the A605, quieter now than three hours earlier. We had nothing between us and finish other than a mad, adrenalin fueled, chaotic scramble for position. We weren’t a big bunch and as we turned onto the show ground and passed the 500m to go sign the sprint was most definitely on. A handful of riders sat up early on the rest of us carried on and raced in aspic, neither gaining nor loosing position against our rivals.

I crossed the line, stopped pedalling and this time cramp hit me with full crippling force. Recovered, I moved away from the finish and waited for the some other SNCC riders. Gary, competing in the 45-49 age group, and Dan were next across. They were followed a few minutes later by Wayne, in the 19-35 group – I must have overtaken him, but I’ve no idea when!

I finished in 3:21:13 and I think somewhere in the top 20. To say I was delighted with my performance would be an understatement.

Overall the organising team had once again delivered an excellent afternoon of road racing. The HQ organisation was much improved and toilets by the pens a definite winner. Starting by age group also worked, though I think more forceful instructions to riders not to interfere with the races starting behind would help. I felt the staggered age group starts made for a fairer race. The timing and qualifying texts were very welcome, it is just such a shame there were issues with the timing which meant many got their texts late. Equally, signage for where to collect the qualifier medals could be improved, though that really was a minor thing. I know there were many other more hidden improvements too.

As for the course, it generally felt safer early on and that was entirely down to the staggered age group starts. I’m in two minds about Alconbury airfield. Personally I don’t mind riding across rough stuff, it adds some flavour, but navigation across some of the expansive tracts of tarmac was at times confusing and the cones aren’t always easy to follow or see. I would happily see it dropped for a gnarly Fenland drove.

The biggest issue though has transpired after the race: the results and difficulty getting accurate placings. It seems some riders, whether by accident or on purpose I wouldn’t like to say, entered the wrong pens, while others entered for the longer route but rode the shorter Leisure route. Looking at the timings from my age group there are 7 riders who placed ahead of the 8 man break. Unless there was an error with the chip timings, I cannot see how they could have been part of our race. If they started ahead then they will have had an advantage, and if that proves to be the case I do think they should be scratched from the results; quite simply they don’t appear to have been a part of our race.

Finally a big thank you to the organisers, especially Tom Caldwell and Malcolm Smith, the police and ambulance services, the NEG and the commissaires, but most of all to the supporters, the volunteers and all the local residents. The Tour of Cambridgeshire is a truly unique event, long may it continue and make Peterborough more than just a stop on the London to Edinburgh line! 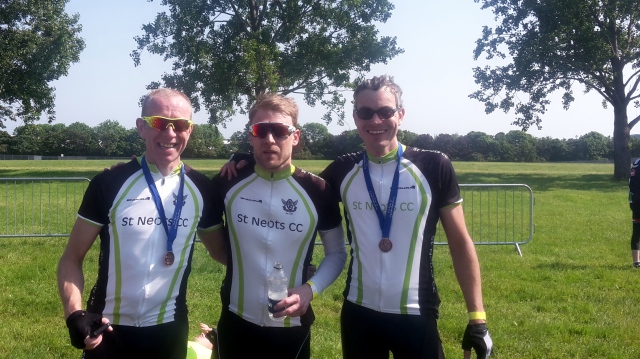 Gary, Dan and Me at the finish – Dan did get a medal too