Posted on August 1, 2014 by richardjostler

At about the same time that I broke my collar bone, Sustrans started improvement works on the surface of their National Cycle Network route 51, between Southoe and the B661. This work was long overdue. I’m back on the bike now so, this week, I decided to try out the NCN for my commute to St Neots station. What would the improvements be like – would this section of the NCN finally be a genuinely fit for purpose national cycle network?

First, the link from the Grafham Water cycle track to the B661 is still mud and grass, however, a patch of tarmac has been laid to fill in a pothole between the small bridge, over a drainage ditch, and the road. 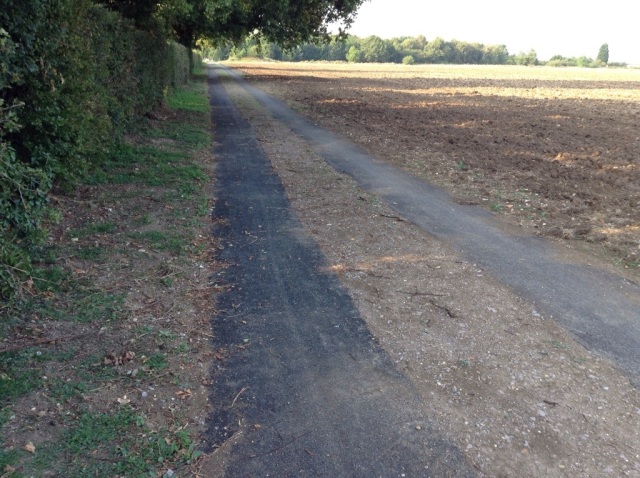 A new tarmac section, a big, welcome improvement but will it stay free from vegetation?

Across the road and things start to look better. Previously, this sector was a 300m stretch of muddy bridleway. In the winter it frequently flooded. It has now been resurfaced with tarmac which is a huge and welcome improvement, but it has been done in a rather strange way. Rather than a single, wide tarmac path, it has been split into two narrower parallel lines with a mud and grass strip running down the middle. I can only guess this middle strip is for horses, but if so, why not put it to one side? The tarmac surface now has four rather than two verges, so four sides for vegetation to encroach from. This surface is a leap in the right direction, but it will be interesting to see how durable it is. 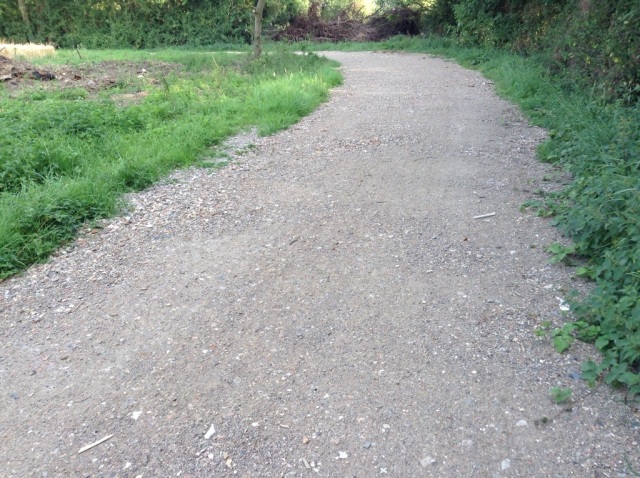 The Tarmac surface soon comes to an end, but it is not the end of the new surfaces. Else where along the route several tonnes of gravel have been used to cover the worst of the muddier sections. On first glance, though not as good as a sealed surface, it looks like another huge leap forward, but start riding on it and concerns surface.

An effort has been made to pack the gravel down, however, there are patches where it is still quite loose. This is especially noticeable around the corners and I found some of them quite sketchy. I had originally planned to put narrower and slicker tyres on my bike – I was glad I went for something a little more robust.

A problem for this route’s surface is that it is shared with farm traffic. While bikes and horses might disturb some of the gravel, it will be interesting to see how it fares under the weight of tractors, trailers and combine harvesters. Well, the harvest will be coming in over the next couple of weeks so we’ll soon know… 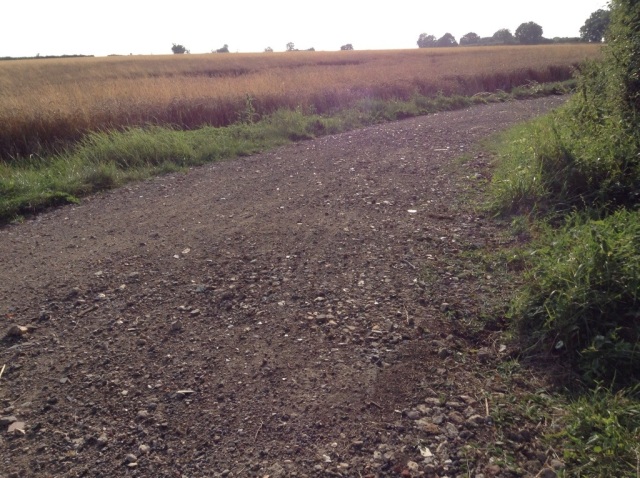 Riding home I noticed areas of the gravelled surface glinting in the late afternoon summer sun. I wondered what they might be, so stopped and had a look. Tiles. The gravel was full of bits of broken, glazed tiles. But now that I was and, for the first time, looking properly at the surface I was shocked by what I was seeing. By comparison to what else I found, bits of broken tile were quite benign. In the about ten seconds I found numerous bits of broken glass, a dozen nails and screws, a bolt and a few other bits of metal, including a two inch hinge! The surface was full of embedded pieces of puncture inducing junk – small wonder that the next day I passed a couple walking home with a flat tyre (I did offer to fix it, but they declined). 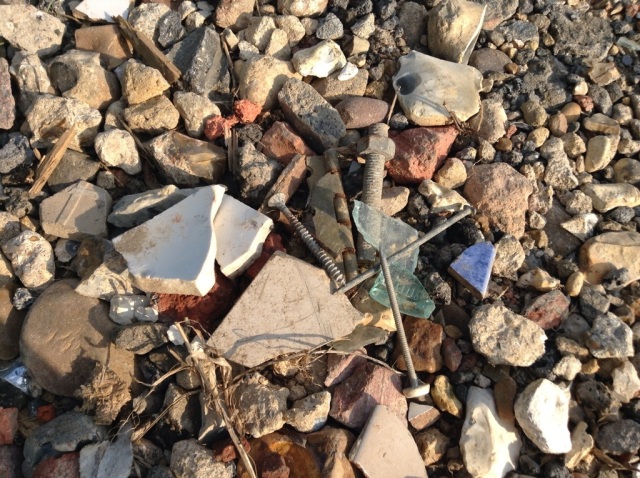 I was angry, I still am angry. Sustrans is an organisation which claims to speak for cyclists, which claims to lobby for better infrastructure for cyclists. Yet here they are, providing a new surface, on their flagship national cycle network, embedded with nails and broken glass! Not gravel, more like cheap, smashed up hardcore from a demolition site. When Sustrans are content to provide surfaces like this, it should be no surprise that cycling infrastructure in the UK is in the parlous state it is.