Gathering Mists on a Morning Ride

Posted on September 5, 2013 by richardjostler

Cycling to work has made me an avid follower of the late night news weather forecast. I had decided during the day to get up earlier the next morning to take a detour round Grafham on my commute. When the sun crests the horizon on a bright September morning is surely one of the best times to ride a bike. But the forecast was for fog. I gambled and set my alarm anyway.

The gamble paid off and I woke to a clear dawn, so I got up. 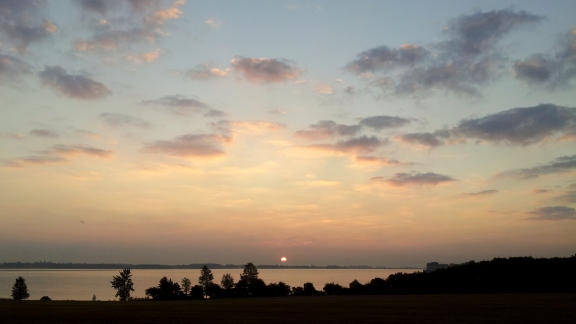 Around the reservoir the car parks were deserted and, save for running rabbits, the tracks were mine alone. A buzzard flew alongside as I rode up one of the small hills, finches and tits flitted in and out of the hedgerows. In the nature reserve I saw a poised heron waiting for breakfast to swim by. Two green woodpeckers flew across a meadow, barking their alarm call. You don’t see and hear that in a car. 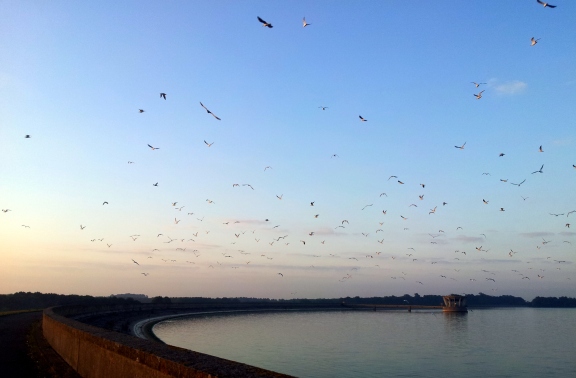 Flock of Gulls by the dam

As I rode on to the dam, Keatsian mists were forming in the hollows. I spooked a flock gulls into the air, waking from their night time roost. Ahead, the imposing wind turbines near Great Paxton appeared to float over the mists, like great machines of an alien race, uncaring of gravity. Certainly a more magnificent sight than Barford power station’s stubby twin chimneys bleeding a brown smudge into the air.

Looking south east from Grafham. Look hard and the wind turbines are just visible through the gathering mists

Riding across the fields the mist layered into strata, back lit by the sun to a warm ochre glow. Riding into a dip in the land, the look of warmth was proved an illusion; the moisture chilled my exposed legs and arms. Back onto the higher ground, I could see a row of poplar trees poking through a bank of mist. They give an impression of a giant crenellated wall, but a weak defence against the warming sun.

2 Responses to Gathering Mists on a Morning Ride